The de Havilland DH.82 Tiger Moth is a 1930s British biplane designed by Geoffrey de Havilland and built by the de Havilland Aircraft Company. It was operated by the Royal Air Force (RAF) and many other operators as a primary trainer aircraft. In addition to the type's principal use for training, World War II saw RAF Tiger Moths operating in other capacities, including maritime surveillance and defensive anti-invasion preparations; some aircraft were even outfitted to function as armed light bombers.

The Nexa DH.82 Tiger Moth is a .46 size electric or gas option scale series warbird with a 1400mm wingspan, constructed primarily from balsa wood and covered with a fuel-resistant covering. This ARF requires assembly and installation of your choice of servos and power system, and includes four piece wing with aluminum wing joiners, wing cabane, bracing and struts, painted pilot, pre-hinged and installed control surfaces. The large battery hatch affords ample room for either electric or gas setups. An absolute classic at any airfield. Love this model Took about 6 hours to assemble Wing wires were a bit tricky and have to be retightened regularly... Added loads of wieght to the front to balence it out about 5 oz Running plane on 4s with an 850kv motor. Like a previous reviewer i forgot to insert the tail wheel into the rudder but fixed it after but bee warned dont miss any steps as it becomes a pain to fix after . In general Very Nice model for the money.....Recommended Flew great on the maiden i made a video of the second flight Here it is https://www.youtube.com/watch?v=mzyjW3D2T24&t=7s Enjoy would love sponsership on new models from the company.. 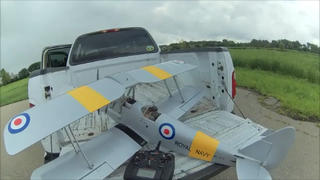 Low and slow bi-plane, easy and fun to fly...However the quality and fit of this ARF is not what I'm accustom to with Vietnamese built ARF kits. You will need to use your past modeller skills to assemble this plane. Also, if you are using electric power you will need a good bit of nose weight. But with two wings the extra weight will not cause a problem, in fact this plane will glide a long ways on landing! My opinion it's about $50 too much for what you are getting...

I also cut the fire wall to move battery all the way out to motor mount and used the main floor as battery tray. Cut an opening in the fuse bottom for cooling. Flys great, looks great, lands at a crawl. Can break down for transportation if needed in just a few minutes. Grad I got this one.

I have around 200 rc planes I just like collecting and flying them. This one helped make my collection more complete I mainly like war birds

This is the follow up review as indicated in my the first one. The plane is complete and first test flights performed. First, I'll provide my take on the assembly of the Tigre Moth. The fit of the parts was good, no real issues to report. The instructions were straightforward and I did not have any problems completing the steps. The hardware provided was typical, as are most ARF products, good enough for the job; nothing terrible but not great. As mentioned in my first post, the electric power system option is straight forward and should work fine. However, due to the massive amount of nose weight needed, a change is suggested. The motor sits flyerforward of the firewall so it would be nice if the battery was moved into that space. This would reduce the extra weight needed by a substantial amount. I may build a box structure to mount the motor to the firewall and cut out part of the firewall to move the battery forward. The wings are another concern. After installing the indexing dowels and mounting the wings, I find that the pylon mount is twisted making the top wing pointed to the left. I did what I could and got most of the twist out, but not all. Second, I tried to install the wing struts. These forced the wing to twist. I had to loosen the top wing and pull it away from the pylon so that the dowel pins are not engaged. Once the wing struts are fastened, the top wing dowels are about a 6mm out of alignment. Twisting the wing is the only way to remount it. I find this very concerning. It does appear that the twist introduces washout to the top wing (a good thing) but the flight test will provide more information. My initial thought was that the first flight will not be much fun. It's now a day later and the test flight was done this morning. After assembly and range testing, a pre-flight was done to check landing gear, motor, direction and travel of control surfaces, and verify everything was tight. Everyone was given notice as to minimize a possible disaster. The first flight was uneventful. Takeoff was straight and I had the trims set close to the final settings. The first 3 flights was with the 11x7 prop turning 10000 rpm. Later flights was with a 12x6 prop turning 9600 rpm. The 12x6 flew better and pulled the plane well. The weight of the plane was noticeable in vertical flight and landing. Landing are a little fast as getting too slow, the plane just loses altitude. Stalls are nothing dramatic, just noses over and rolls slightly to the left. The stall does not telegraph itself in advance, the plane just stops flying. If I could find a way to loose 12 ounces of weight, it would be a very good flyer. As is, its good, not great. I doubt that there is any "easy" way to trim weight as most of my ballast is way forward already. I'll need that weight regardless of how I make it up, lead or motor, it's still weight. I know that I'm a little nose heavy, but the stability is worth the extra 2-3 ounces. I will work on this and see. Those that can get the total flying weight close to the 3000g spec, more power to them, I just don't see that happening in my case. My Specs Power: 3842 830kv on 4S 4000mah lipo Props: 11x5.5 11x7 12x6 all APC thin electric. final prop used is the 12x6 Power draw: 11x5.5 35a, 11x7 39a, 12x6 44a 560-700 watts RPM: ~10,000 with the 11x5.5 being greatest and 12x6 least Final assembled weight w/o ballast - 3000g 6.6lbs Nose weight added - 525g 18.3oz Total takeoff weight - 3550 g - 125 oz or 7.8 lbs (more than 18 oz over spec) With a calculated wing area of 880 sqin, the numbers are reasonable. I would like the manufacturer update their specs with more accurate data, and not idealistic targets. Final ratings Price - 8/10 The "kit" - 7/10 includes assembly, fit, supplied parts, etc. Appearance - 8/10 Flight performance - 7/10 Total value - 7/10 (what use is a good looking plane that flies poorly)

I ordered this recently and Motion RC was very quick to send it out (3 days!). I've been working on it for the past few hours and here are my impressions so far. First, a short background of my experience. I've been building and flying model planes for 50 years. I have well over 100 kits and scratch build planes under my belt with another 30+ ARFs. I've lost count 10 years ago. I have also been flying electric planes for the last 20 years. On to the review: 1. The plane was packed well with a LOT of tape holding things down so the planes arrived in good shape. There was a small bit of damage that looks to be done prior to boxing. 2. In the packaging bags, it looks really good.... BUT 3. All parts are well bagged and appear to be in good condition and are of reasonable quality (for an ARF). 4. All parts (so far) fit well and should present no issues later on. 5. Hardware for electric power is of reasonable quality and I don't see them being an issue. Mounting is easy and nothing difficult. 6. Hardware (bolts, nuts, etc.) supplied appears to be of reasonable quality and nothing that should be a surprise to anyone with some experience. Here are my issues: 1. The covering is "shelf paper". If you don't know what that means, it is covering that is vinyl with adhesive backing (think of tape). I don't like it for several reasons: Heavy (I'd guess 4-10 oz. over UltraCote). Shows the wood was not sanded and shows all of the "fuzz" and grain. 2. Because of the heavy covering and short nose, I'm going to guess that 8-16 oz. of nose weight will be needed to balance the plane (electric power). Every ounce of tail weight will need 3-4 times as much in the nose. If I'd had the necessary amount of silver UltraCote on hand, I'd striped the plane, sanded everything, and recovered. As it is, I'll try it as designed and hope for the best. (My arthritis makes stripping the plane that much harder so I shouldn't complain too much) 3. All of the struts are wire with plastic "shells" to make them look scale. Again, I don't like this design but we'll see. Just more weight and things to come off. That's it for now. Remember, I only have about 4 hours working on it and most of that was mounting a new pilot and painting the cockpit. I will post another review once it has been flown. Right now, I have reservations. Ratings: Overall Quality - 7/10 Finish - 7/10 for looks Actual Finish - 4/10 (this is from a builder's perspective) Electric Power - 4/10 due to heavy covering and not being able to move the batteries forward of the firewall (translate-adding lead to nose for balance) Glow power - 7/10 (based on my experience AND selecting a 4 stroke engine as power) Flying - N/A (will provide review after first flights) Value - 7/10 for the average pilot, personally-5/10 (If it flies well, then 8/10) FINAL SCORE - 6/10 My low score is mainly due to the covering. The only people that benefit from "shelf paper" is the manufacturer, NOT the consumer. Ron F.